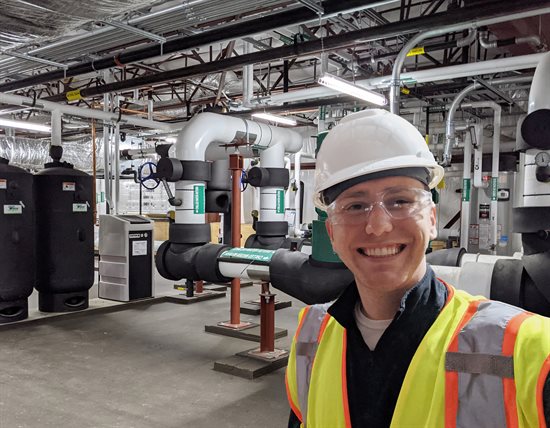 Chris Napier knew early on that Illinois was the university for him. While still in high school, he participated in a summer camp at the University of Illinois and was able to gain early insight into The Grainger College of Engineering. “Right away I knew this is where I wanted to be. Just being in the labs and seeing the different technology and the atmosphere, it was very invigorating... And the campus is beautiful!” he said.

As an undergraduate, he was president of the Engineering Student Alumni Ambassadors (ESAA) and worked as an intern for Abbott Laboratories for two summers after interviewing with them through the engineering career fair. During his senior year he accepted a full-time position to work in their professional development program (PDP). Of course, the 2020 school year ended in an unexpected way, with COVID-19 hitting the U.S. during the final few months of Napier’s undergraduate career. Having just accepted the job with Abbott, he was called directly into action. Within a week of his last final exam, Napier moved to Westbrook, Maine, and immediately began work on their BinaxNOW COVID At-Home Test.

“It was really a whirlwind. When I found out I was going to Maine I was taking one of my last finals. It was crazy, but you know, everything was crazy in the early days of the pandemic.”

Napier is a facilities engineer working on the production and validation of the facilities that are now mass producing COVID tests. He said he really enjoyed working on a project that started from the ground up.

“The [BinaxNow] test was still in the process of being developed and the manufacturing facility wasn’t even built yet. It was such an interesting challenge to be on a team with a clear goal of what you want to do but the things aren't developed yet, so you're building towards an abstract goal of what you think is going to work. On the facility engineering side, a lot of it was learning as we go and just reacting to new information. Every day was something completely different. As an Illinois grad, I felt prepared that I could handle the roller coaster and roll with the punches to kind of keep pushing through and embrace the challenge. I never felt that I couldn't keep up,” Napier said.

As an undergrad, Napier had an interest in pursuing graduate school and the online M.Eng.ME program allowed him the flexibility to continue his education online while working. He realized after working in industry that he has opportunities to follow a technical route or a business route. His interests led him toward the technical route and he wanted to learn more and continue his education.

Napier said his professors are as supportive and understanding as his employers are of his multiple school and work obligations. “All the professors I've had so far are very flexible and very responsive, even after hours when I’m asking questions, which has been great. I always feel very supported.”