Lois Yoksoulian, U of I News Bureau 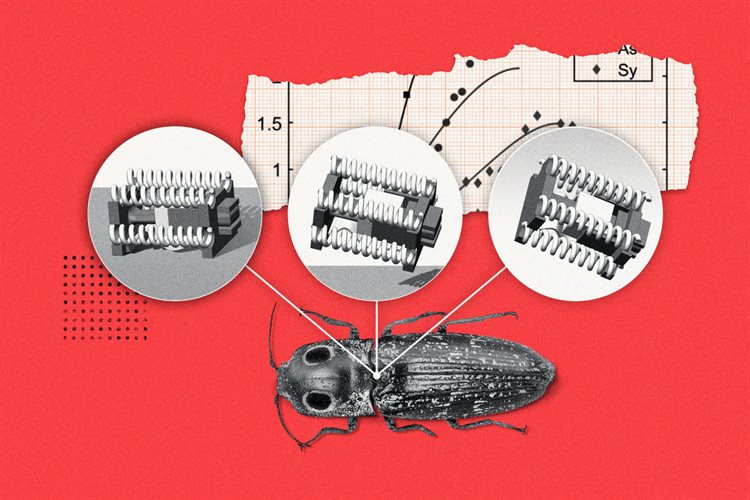 Researchers have made a significant leap forward in developing insect-sized jumping robots capable of performing tasks in the small spaces often found in mechanical, agricultural and search-and-rescue settings.

The findings are published in the Proceedings of the National Academy of Sciences.

Researchers at the University of Illinois Urbana-Champaign and Princeton University have studied click beetle anatomy, mechanics and evolution over the past decade. A 2020 study found that snap buckling – the rapid release of elastic energy – of a coiled muscle within a click beetle’s thorax is triggered to allow them to propel themselves in the air many times their body length, as a means of righting themselves if flipped onto their backs.

“One of the grand challenges of small-scale robotics is finding a design that is small, yet powerful enough to move around obstacles or quickly escape dangerous settings,” Tawfick said.

In the new study, Tawfick and his team used tiny coiled actuators – analogous to animal muscles – that pull on a beam-shaped mechanism, causing it to slowly buckle and store elastic energy until it is spontaneously released and amplified, propelling the robots upward.

“This process, called a dynamic buckling cascade, is simple compared to the anatomy of a click beetle,” Tawfick said. “However, simple is good in this case because it allows us to work and fabricate parts at this small scale.”

Guided by biological evolution and mathematical models, the team built and tested four device variations, landing on two configurations that can successfully jump without manual intervention.

“Moving forward, we do not have a set approach on the exact design of the next generation of these robots, but this study plants a seed in the evolution of this technology – a process similar to biologic evolution,” Tawfick said.

The team envisions these robots accessing tight spaces to help perform maintenance on large machines like turbines and jet engines, for example, by taking pictures to identify problems.

“We also imagine insect-scale robots being useful in modern agriculture,” Tawfick said. “Scientists and farmers currently use drones and rovers to monitor crops, but sometimes researchers need a sensor to touch a plant or to capture a photograph of a very small-scale feature. Insect-scale robots can do that.”