Matalon honored in recent issue of Combustion Theory and Modelling 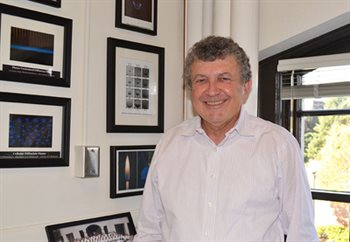 The dedication, initiated by Matalon’s colleague and former MechSE faculty Carlos Pantano, reads: “This special issue is dedicated to Professor Moshe Matalon on the occasion of his 70th birthday, as a tribute to his outstanding contributions to Combustion Theory and Fluid Mechanics and for his leadership and dedication to Combustion Theory and Modelling since its inception in 1996. Moshe has made significant and long-lasting contributions to the development of consistent mathematical theories explaining the interrelation between fluid mechanics and combustion by employing rigorous asymptotic methods and careful numerical simulations in many configurations over the last 44 years. This includes the formulation of hydrodynamic theory of premixed flames, the derivation of an invariant formula for the flame-stretch rate, and the characterization of thermo-diffusive instabilities in non-premixed flames, among other contributions. The papers collected in this issue by friends and colleagues of Moshe represent a snapshot of his research philosophy, that combines theoretical and numerical studies to aid in the interpretation of experimental results, to advance understanding and to push the frontiers of combustion modelling development and their use in practice.”

“I am very honored by this gesture, and by seeing the many contributions from friends and colleagues,” said Matalon, who is the Editor in Chief of the journal.

He received his PhD in mechanical and aerospace engineering from Cornell University in 1978. After two years on the faculty at the Polytechnic Institute of New York, he joined the McCormick School of Engineering and Applied Science at Northwestern, where he was Professor of Engineering Sciences & Applied Mathematics and Professor of Mechanical Engineering. He has been on the MechSE faculty since 2007 as the College of Engineering Caterpillar Professor.

Matalon is a Fellow of APS, AIAA, and the Institute of Physics (IOP). In addition to Combustion Theory and Modelling he is also Associate Editor of the Journal of Fluid Mechanics.