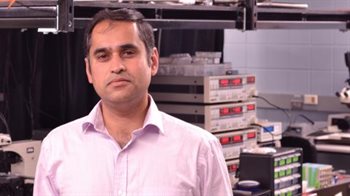 Associate Professor Sanjiv Sinha is this year’s winner of the Stanley H. Pierce Faculty Award from The Grainger College of Engineering.

The award winner is selected by Engineering Council, a student-run union of Grainger Engineering committees and societies.

Stanley H. Pierce was an inspiring leader in the constant endeavor for better relations between faculty and students. During his years as associate dean of the College of Engineering, he gained the admiration and respect of the students because of his sincere concern for them as individuals and as a group. He was genuinely interested in their problems and achievements, both academic and personal, and established a rapport with them. In memory of this exemplary spirit, the Stanley H. Pierce Award was established by the late W. L. Everitt.

As a guideline for the award, he proposed: “These awards would be given annually, one to the undergraduate student and the other to the faculty member, who are selected as having done the most to develop empathetic student-faculty cooperation.”

Sinha has been MechSE’s Associate Head for Undergraduate Programs since 2019. He earned his MS and PhD in mechanical engineering in 2001 and 2005 from Stanford University, and a B. Tech in mechanical engineering in 1999 from the Indian Institute of Technology. He joined MechSE as an Assistant Professor in Fall 2008. His student-focused recognitions in recent years have included being named an Outstanding Advisor in 2018, which is given only to about 10 percent of faculty each year in Grainger Engineering. He has also been named to the List of Teachers Ranked as Excellent six times since spring semester 2011.