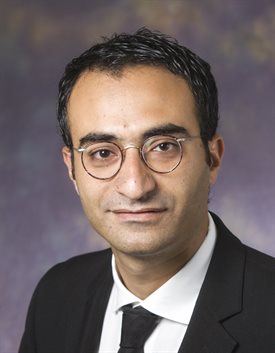 His research presentation, “Morphing hair, artificial muscles, and the future of automation,” discussed the “future of work” and explored how ubiquitous automation and artificial intelligence are driving changes.

The future of work is shaped by the synergy between ubiquitous automation and artificial intelligence. Automation is currently driven by electric motors, which deliver clean mechanical actuation and are already replacing engines in transportation, in addition to their role in robotics, prosthetics and energy. Tawfick described a roadmap to replace bulky electric motors and exploit instead bioinspired materials, processes and self-organization phenomena for automation. He discussed the use of liquid surface energy to manufacture surface texture by self-organization, as well as for actuating morphing surfaces, and described the design and production of artificial muscles which use electric, thermal, or chemical energy to generate contractile motion. These examples shed light on the future of work propelled by new materials, nonlinear mechanics and unusual manufacturing processes.

Tawfick is an associate professor in MechSE and a part-time faculty member at the Beckman Institute. He earned his PhD from the University of Michigan and was a postdoctoral associate at MIT.

The Beckman Institute Director’s Seminar lecture series was designed to encourage interdisciplinary collaboration among Beckman faculty members. The monthly seminars offer the opportunity to learn about Beckman researchers and their fields of study.

Tawfick’s seminar can be viewed here (access is currently limited to only those with a UIUC Box account).