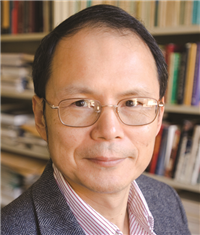 Professor Hsia studies the way cracks form in brittle materials, such as glass and metal-particularly when they are subjected to heat or temperature change. His experiments with ordinary glass look at the way cracks spread through glass that has been heated and cooled.

After making an initial scratch at the edge, a small piece of glass is heated and then dipped in a cold bath. Varying the amount of heat and cold allows him to observe the way the cracks spread through the glass. When the difference between the hot and cold temperatures is relatively small, the cracks spread, or propagate, in a straight line. But, as the difference between the hot and cold temperatures grows, the driving force increases and the cracks start to form multiple cracks and/or waves.

Professor Hsia suspects that as the temperature gradient increases, the cracks dissipate the energy by forming new surfaces through the formation of multiple cracks and that the wave-like cracks that form at the highest temperature gradients are a way for the cracks to generate new surfaces with a single crack. Understanding how this occurs may provide clues that would allow stress-dissipating factors to be built into car windshields, so that cracks would be arrested rather than destroying the whole windshield.

In metals, Professor Hsia is studying the failure of thermal barrier coatings in gas-turbine engines. He suspects that the surface roughness of the bond coat used to attach the coatings onto metal may play a role in the failure of such coatings at high temperatures. He is currently investigating the mechanism by which the rumpling of this bond coat over time-due to high temperatures and other factors-roughens the surface of the bond coat and causes the coating to slough off over time.

Service to Federal and State Government