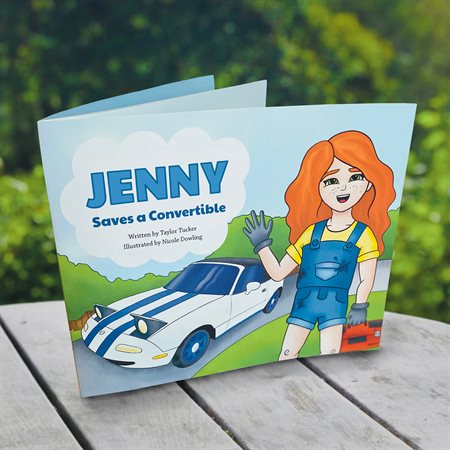 Tucker always had a passion for writing and a dream to share stories with children on topics that matter. Then, in 2019, bioengineering professor Jennifer Amos, who is also a mentor with Grainger’s Engineering Ambassadors (EA) professional outreach program, approached Tucker. Amos was looking for a story for EA to use during visits to elementary school classrooms, and Tucker was up to the task.

She knew the book should both be STEM-based and communicate some of the positive ways in which engineers impact the world, but the rest was up to her. She worked with graphic designer Nicole Dowling, who was completing her senior year at UIUC at the time, to finesse the story and add illustrations. The end result – Jenny Saves a Convertible – takes readers through the main character’s efforts, with her grandfather’s help, to restore the engine of an old car—explaining, in simple terms, for a young audience, the mechanical process of an engine. 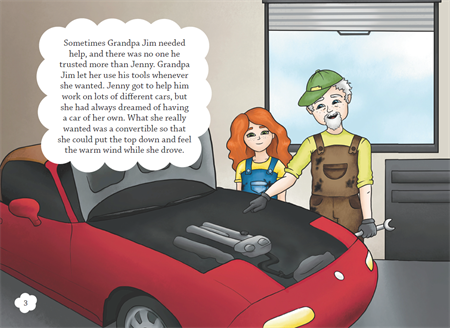 The process of explaining engineering topics to children was a learning opportunity, said Tucker. The challenge was to make complex topics – like a car’s manual transmission – understandable, but not so simple that they convey the wrong idea. Dowling, who minored in psychology, had experience with complex storytelling for young readers that helped Tucker better communicate these ideas. She and Dowling both felt strongly about including diverse characters, and there were some ideas they each were passionate about—Jenny’s red hair, for instance, was Tucker’s vision. “Nicole and I had really positive collaborations and open and easy discussion through every decision,” she said. They worked so well together, in fact, that they are currently working on a second book.

Beyond teaching children about the basic four-stroke engine, Tucker hopes that learning how a car works will empower children to learn more. “In telling this story, I hope to encourage readers to look at common products of engineering in the world around them, like cars, and ask questions like ‘How does this work?’ and, more importantly, ‘How can I make it better?’”

She said that, like the book’s main character, she has always been very curious. Tucker was inspired by her own experiences working with a grandfather who was an automotive engineer. He taught her design and automotive concepts and encouraged her to work with him on fix-it projects, framing each as a learning opportunity. The experience influenced Tucker’s decision to pursue engineering mechanics at UIUC. 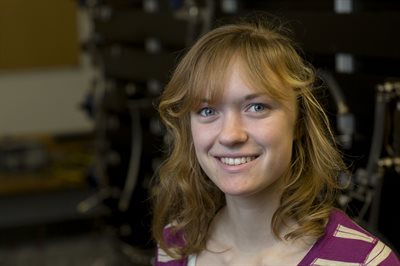 During her undergraduate career, she started doing research with College of Education associate professor Emma Mercier, helping with data processing of group work for TAM students. She enjoyed the research so much that she decided to continue working with Mercier and pursue a master’s degree through the college’s DELTA program. As a graduate student in education, coming from engineering, Tucker learned lots of new theory in the vast field of education.

Earlier this month, Tucker defended her MS thesis. She plans to take a year off before entering her PhD program in industrial and enterprise systems engineering (ISE) at UIUC and later find a job in industry. Tucker’s research will focus on investigating teamwork and collaboration and how to make both students and engineers improve their ability to work together. Having followed her curiosity and passions throughout her life, Tucker will undoubtedly end up somewhere she feels inspired and excited to work.

To read more of Taylor’s inspiring perspective on engineering in the world around us, check out her MechSE blog, with more than 100 posts written throughout her UIUC career.

The book has also recently received other media attention, including from WJBC Illinois, the UIUC News Bureau, I-STEM Education Initiative, the Department of ISE, the Florida News Times, and several regional radio stations.