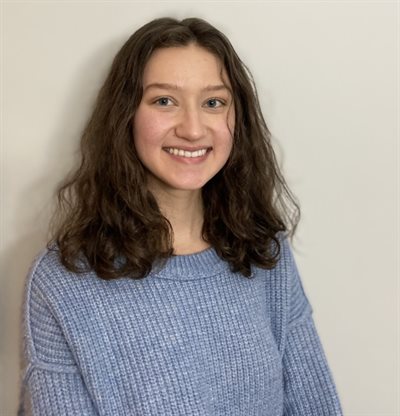 Grace Smith is a sophomore from Orland Park, Illinois, studying mechanical engineering. She is heavily involved within the MechSE Department as a leadership member of both the American Society of Mechanical Engineers (ASME) and Women in MechSE (WiM), and she is an undergraduate researcher in Professor Alison Dunn’s Materials Tribology Laboratory.

Smith also has many outside involvements including a role within the Society of Women Engineers (SWE), work on the education Illinois Action Climate Plan (iCAP) team, and participation in the Women’s Glee Club and Unified Voices a cappella group.

“I love that the university provides me with the opportunity to do so much,” Smith said. “I can take chorus classes in the School of Music and do sustainability work through the iCAP teams, all while being an engineering major in Grainger.”

Before Smith was officially a student at UIUC, she participated in several of its high school summer programs aimed to introduce girls to the various fields in engineering. Not only did she get to explore the campus, but she learned about different subjects within mechanical, electrical and computer, and aerospace engineering. During the program, she discovered her passion for mechanical engineering, and a few years later came to Illinois.

Smith serves as Special Projects Co-Director for ASME, organizing the annual ASME Homecoming Parade float and overseeing the ASME Engineering Open House (EOH) exhibits. She also leads the EOH project for WiM and organizes workshops as their Technical Director. Smith’s interest in sustainability led her to participate in the education iCAP team, where she gives recommendations for improving climate action awareness in classes or as part of the overall curriculum. As Environmental Co-Chair on the Community Service Committee of SWE, she is able to further promote sustainability through organizing SWE participation in events like Illini Lights Out, Tupperware raffles at general meetings, and cleaning Green Street.

On the non-technical side, Smith said her participation in Women’s Glee Club and Unified Voices help balance her schedule. She first learned of the newly founded RSO after meeting the president during a 10-day study abroad program in London in summer 2022. Not only does singing provide a break from her rigorous schedule, but it allows her to explore passions outside of engineering.

“As an engineering major, you’re encouraged to do things for your resume that will help you in your career, and while those things are important, I find it equally necessary to explore other passions outside of engineering,” Smith said.