An interview with Sascha Hilgenfeldt

Sascha Hilgenfeldt is a professor in the Department of Mechanical Science and Engineering. After reading his research statement, I wanted to learn more about his work with fluid mechanics in the health and biomechanics area. 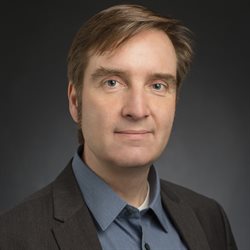 With all of his knowledge and experience, I asked him how he mentors his graduate students. He said a large part of his work with graduate students is very free flowing, with the goal of instilling some creativity in the student. While close supervision and instruction is important initially, he said he likes to see the graduate student come up with ideas and solutions to issues by themselves and follow them through to fruition before they earn their PhD.

Next, I asked Professor Hilgenfeldt to walk me through the technical work he has performed. He first mentioned work on a phenomenon called sonoluminescence in which oscillating bubbles emit light. He then was interested in applying bubble oscillations for use in microfluidics. He illustrated a simple microfluidic device made from soft materials. This device uses one oscillating bubble to ‘sort’ particles flowing through the device. In the flow field induced by the bubble oscillation, particles of greater diameter would drift upwards and particles of smaller diameter would drift downwards. He mentioned research with this device is not yet complete. The additional challenge of this research is to describe not only the fluid mechanics, but the mechanics of the particles in the fluid and the forces acting on them. Clearly, there are some differential forces that cause the larger particles to move differently than the smaller particles.

He also leads research into biological tissues, which have a structure similar to foams.  He first began to work with foams during his postdoctoral fellowship at Harvard, where he learned that tissues and other related systems are morphologically similar to foams.

Finally, we discussed collaboration in academia. I asked Professor Hilgenfeldt what he expected the fluid mechanics field to look like in 10 years. His response was that he expects fields to mesh. He cited a fluid mechanics conference that he attends annually. Twenty years ago, this conference hosted roughly 400-500 people. At the last conference before the pandemic, over 4,000 people attended. As research develops, the traditional fields of science and engineering are becoming more connected and reliant on each other. In the future, Professor Hilgenfeldt expects increasing collaboration among all fields of academia to continue to develop unique solutions to all sorts of current issues that we face every day.