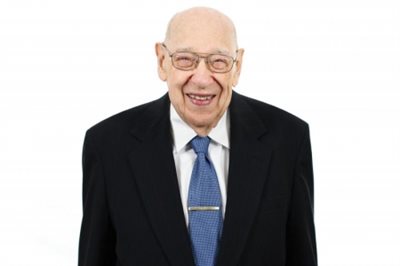 Robert D. Kern, 96, passed away at his home in Wisconsin on November 8, 2022. He was the co-founder, with his wife Patricia, of Generac Corporation and The Kern Family Foundation.

Kern was a MechSE alumnus and long-time friend of the department. Curious and imaginative and fascinated by how things work, he received his B.S. in mechanical engineering in 1947 from the University of Illinois Urbana-Champaign, where he met his wife, Patricia. His advanced degrees, he once said, came at Waukesha Motor Company, designing engine generators for railway cars.

Deciding to go into business for himself, Bob designed a lightweight portable generator. With a small team, he set up manufacturing in a garage in Wales before building what became Generac’s headquarters in the Town of Genesee in 1965. By the time Kern retired in 2006, Generac was the world’s largest producer of portable and stand-by generators.

In 2015, Kern was inducted into the Grainger College of Engineering Hall of Fame, recognized for his entrepreneurial tenacity in building Generac into a leader in lightweight portable generators and for his philanthropic spirit in helping shape the next generation of engineers.

Through an ongoing grant, The Kern Family Foundation is currently supporting a project, in part with MechSE, to improve mentoring of undergraduates in research.