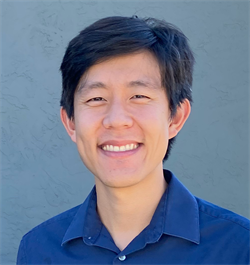 MechSE recently welcomed to our faculty Justin Yim from Carnegie Mellon University, where he held a two-year postdoctoral fellowship.

“I’m interested in the body design of legged robots as well as the control—how we solve the problem of balance and get the robot to coordinate [its processes],” said Yim, whose research, which is often bioinspired, primarily focuses on robot locomotion and dynamics. “I’m interested in making robots that are more effective at getting around where humans go, and maybe even going places that are difficult for humans [to travel]. Robots are great in factories, but if they don’t get out, they can’t do things elsewhere—for instance, helping people in homes, helping to fight fires, or exploring.”

Yim, who received funding from the Army Research Office while in graduate school, worked on a one-legged jumping robot for his PhD, developing mechanical principles for high power control algorithms for precise maneuvering. The robot was inspired by the Senegal bushbaby, a small, nocturnal primate with very powerful, springy legs.

“I showed that [one leg] can still be a very effective way of moving around, given some particular limitations,” Yim said. “One leg is not a body shape that we see a lot of the time; there aren’t very many animals that use only one leg. Even though one leg seems like it’d be a really tough balance problem, you can still run and cover large obstacles. You can still get a robot that is precise, powerful, and fast.”

Yim now hopes to use his one-legged locomotion and design strategies to improve the movement of multi-legged robots.

“If you think about all the muscles you use when you’re standing, you’re using your hips, knees, and feet to stay upright and to keep yourself moving forward. If we look at the actual energy and motion that’s being produced, you have lots of muscles that are acting in different directions even though you’re only really moving in one direction while staying upright,” Yim explained. “If we can design a robot that takes advantage of the way its actuators are arranged, and the way that they are directed into the motion of the limbs, then we might be able to make robots that can be faster, more efficient, or able to carry heavier loads without using tons of motors acting in different directions, which is one way many robots are built today.”

Yim also collaborates with biologists to use robots to answer biological questions. “I’m currently using [our robot] to investigate other types of animals, like squirrels, that do similar types of jumps,” Yim said. “If we build a robot that we understand and can experiment with, we can use our understanding of its locomotion to inform to [better understand] how animals move.”

Yim currently has funding through the Computing Research Association’s Computing Innovation (CI) Fellows program, supported by the National Science Foundation, to investigate methods for improving the ability of four-legged robots to navigate complex outdoor environments such as walking through branches on uneven terrain. His interest in robotics began in elementary school when he participated in FIRST LEGO League, a program that guides young learners through STEM exploration.

“I’ve benefitted greatly from participating in FIRST LEGO League and FIRST Tech Challenge—that’s part of what spurred me to get started in robotics research as an undergraduate,” Yim said. He has since returned the favor by providing lab tours and demos as a college student and serving as the departmental outreach coordinator during his doctoral work.

“I’m really excited about engineering outreach,” he said. “As a postdoc, I helped develop STEM curricula around computer-aided design for kids in the Pittsburgh area. I think it’s both really rewarding to do that and important to achieve [stronger diversity] in STEM so that different types of experiences are represented in the real world.”