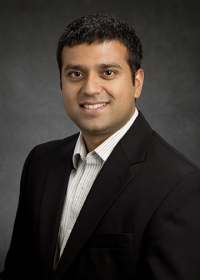 Optica Fellows are selected based on several factors, including outstanding contributions to business, education, research, engineering, and service to Optica and its community. As Fellows can account for no more than 10 percent of the total membership, the election process is highly competitive.

Bahl, a Kritzer Faculty Scholar, was recognized in the “nonlinear optics” subdivision “for transformative contributions to the understanding of Brillouin light scattering and developments in nonreciprocal photonics.”

He has had a prominent impact on the fundamental understanding of Brillouin light scattering and his papers are frequently cited as seminal works in the field. Lasers based on stimulated Brillouin scattering (SBS) have been used for many years for optical amplification, noise mitigation, and phase conjugation, but the effect was considered primarily to be an optical phenomenon and one in which the phonons did not have a significant role.

Bahl was the first to demonstrate that SBS lasers can also be produced using low frequency phonons having very long lifetime, which eventually led to undiscovered fundamental phenomena like Brillouin cooling of solids and Brillouin scattering induced transparency (BSIT).

His was the first experiment in which an opto-mechanical device was used to produce a non-reciprocal effect, which has been a major technical challenge for the photonics community. His efforts give photons new access to mechanical effects (e.g. for inertial, mass, and compressibility sensors) as well as generate new optical phenomena that were not previously possible.

Bahl has also made major scientific contributions towards the development of non-reciprocal photonic devices, including isolators and circulators, which are especially important non-reciprocal components needed in nearly all photonic systems. Bahl’s most significant contributions to this topic are on the demonstration of non-reciprocal Brillouin scattering induced transparency, the demonstration of non-reciprocal chiral effects for phonons and photons, and on the use of two-dimensional textured acoustic waves in nanophotonic devices for producing optical isolators. His discoveries have potential to change the landscape of how on-chip photonic networks are fabricated.

“I am pleased to welcome the new Optica Fellows,” said Satoshi Kawata 2022 Optica President. “These members join a distinguished group of leaders who are helping to advance the field optics and photonics. Congratulations to the 2023 Class.”

Bahl and the class of Optica Fellows will be honored at the Society’s conferences and events throughout 2023.