A summer's worth of research: Spending 8 weeks as Jump ARCHES interns

In a large room just past several offices at the Health Care Engineering Systems Center in Urbana, eleven posters were proudly displayed for guests to see. All were covered meticulously with methods and findings, with some including interactive displays. A culmination of eight weeks performing research, coding, analyzing, and more by the HCESC Jump ARCHES summer interns.

A group of undergraduate interns from various majors, ranging from computer science to statistics and bioengineering, were paired up with eleven Jump ARCHES projects to assist professors, doctors, and researchers with their work. All projects covered the medical field in some way, whether it be through new, interactive methods of training future doctors to assisting patients in their own homes. The interns' work was featured on Friday, July 29 with a poster session. Researchers said the work the students did was invaluable.

"I've been so impressed by just the quality of work and how much we were able to get accomplished in eight weeks," says Dr. Nicole Rau, OSF Neonatologist and a Jump ARCHES grant recipient. "Sonam did a great job, and I could not believe how far we've come since she started. I've been really impressed by the whole program."

The internship gives undergraduate students a chance to to work on innovation that comes from the intersection of healthcare and engineering. This year was slightly different compared to internships of years past. For the first time, Jump ARCHES grantees were offered the opportunity to have a fully funded summer intern work on their projects.

HCESC Simulation Engineer Lydia Lee says this sort of experience is unique not only for interns, but also researchers.

"It allows clinicians access to engineering students and it allows the students and the PIs here access to clinicians, which is really important in developing these healthcare innovations," says Lee. “Jump ARCHES in general allows for collaboration that is hard to find if this organization didn't exist. If you're working in industry or another university that doesn't have access to clinicians, that's huge for the development of your project. But Jump ARCHES really allows for U of I and OSF to really build that relationship. ”

Two interns, both mechanical engineering undergraduates, shared their experiences in the internship. 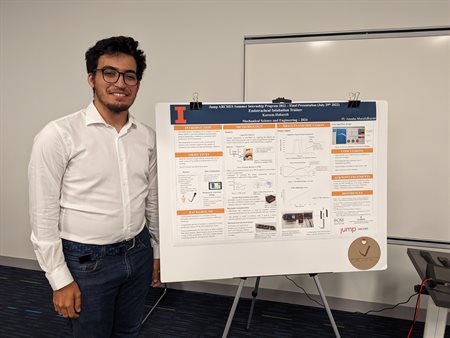 "What I did with this project was try to jam pack as much as we can into a very small package because the idea is that as the more sensors we have, the more feedback we can give to the medical student," said Habayeb. That meant designing several mechanical parts, printing and manufacturing electrical componens, working on controlers, and code. He said he had to step outside of his comfort zone for some of the work, but explained he's appreciative of the lessons he's learned.

"I think what I learned here was that everything really does need to come together. Having an understanding of everything that's happening is really helpful to approach a project in a way so that it's not some sort of patchy, Frankenstein thing." 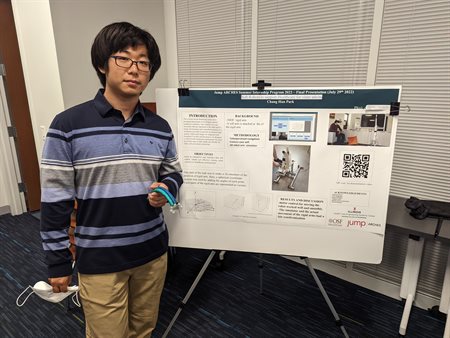 Before his internship, Park had never seen a soft robot in person before. Not only did that change over the course of eight weeks, but he found himself creating an interface for one to allow users to control it to assist edlerly patients.

"My main part was to make a controller that can actually control these four wheels for the robot to move and also make a signature for the rigid arms to check what's the current position fo the arm right now."

Park's goal is to become a simulation engineer one day, and said this internship was a good step towards his future.