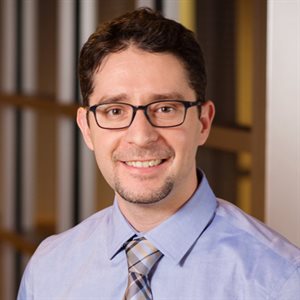 The most commonly used methods for achieving potable water are thermal desalination, in which salt water is heated and evaporated, and reverse osmosis desalination, in which salt water is pressurized against a filtration membrane. However, these processes are usually performed on a large scale, taking place at a physical plant with a fixed energy source. In contrast, tactical units comprised of small numbers of Marine soldiers are purposefully limited in space and energy resources in order to be agile.

“The program is aimed at the development of electrochemical water desalination processes for use by expeditionary Marine units,” Smith said. “My award seeks to do this by leveraging battery-like electrodes that use microfluidics to facilitate energy efficiency with high-throughput, lightweight systems. It’s exciting to have support from the Navy to further this technology toward practical use.”

Faradaic deionization (FDI), which is characterized by the occurrence of a Faradaic current when a chemical substance is oxidized or reduced at an electrode while simultaneously absorbing ions, has shown promise for reliably desalinating seawater. Although previous FDI seawater desalination demonstrations have focused on battery-like cycling conditions that lack continuous flow, Smith’s prior work has shown that, when not addressed in design and operation, water flow introduces new mechanisms that can cause electrodes to cycle less efficiently than in non-flowing cells. His work has also leveraged this understanding to increase flow-cell efficiency by using fluid circulation and increased electrode charge capacity.

“This research will combine physics-based modeling with novel electrode fabrication strategies to design microfluidics that maximize water permeation and ion transfer rates within battery-like electrodes,” Smith explained. His research will also seek to make the desalination device flexible to the feedwater source, which could be brackish water, seawater, or an alternative source—each of which have a unique composition profile. “This motivates us to develop electrodes to remove salts other than just sodium chloride that has received so much of our attention in the past,” he said. “It also builds on our recent work with superionic conductor materials that exhibit ion-absorption preferences that are different than earlier electrode materials that we explored.”

Smith is the sole principal investigator for the three-year award, which is funded through the Department of Defense and administered through the ONR’s Expeditionary Energy program. Smith’s award is one of three awarded nationally out of a large applicant pool. Each award will address the program’s goal to advance “toward next-generation electrochemically based water-purification technologies (e.g., capacitive and intercalative deionization) to fill necessary gaps en route to prototype design and establish a US-based workforce on future energy-efficient technologies relevant to the United States Marine Corps.”