An interview with Amy Wagoner Johnson 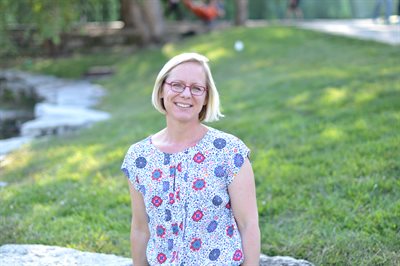 After studying musculoskeletal tissue mechanics in Professor Amy Wagoner Johnson’s ME 482 course, I knew a discussion tailored towards health and biology with her would be very interesting. We had a lively talk about her career. Our discussion touched on the many possible directions that she considered in her life and how she made the decisions that brought her to where she is now.

Wagoner Johnson first found a more serious interest in science during high school while living in France. She felt particularly drawn towards physics, and when it came time to apply for college, that is what she wanted to study. Her father, Professor Robert Wagoner, was a distinguished professor in the Ohio State University’s Materials Science and Engineering department and an expert in metallurgy, and so his advice carried weight. Her father suggested she study engineering. This was the one of the first big decisions she found herself making and she took her father’s advice. The next decision was which field within engineering she would specialize. She says back then, the mechanical engineering profession was focused a lot on automotive engineering. She also considered materials science, metallurgy, or ceramic engineering. Attending the same department in which her father was Chair, Wagoner Johnson says she did not want to take courses that her father instructed due to the challenges associated with having her father as her instructor and his somewhat interesting reputation (in fact, locking the door after the bell rang!). Understandably so, she chose to study materials science, rather than metallurgy, and earned her degree in 1996.

Toward the end of her undergraduate studies, she needed to decide what to do with her degree. She said she felt an innate calling to go to graduate school and later become a professor.  She studied Materials Science at Brown University for both her masters and doctorate degrees, working with metal matrix composites. Once again, she was faced with the decision of what to do. During graduate school, she attended a seminar on an emerging field of study on trabecular bone and its deformation. She decided then that the health and biology field within materials science was where she wanted to work. After her education, she had to choose between a career in industry or academia. She interviewed with some big names like Pratt and Whitney and GE Aerospace, but soon realized that industry did not offer the intellectual freedom she wanted. She decided to stay in academia.

Wagoner Johnson began working at the University of Illinois in 2001 in the former Mechanical and Industrial Engineering department as a research scientist. In 2005, she wanted to apply for an assistant professorship. Whether that would be at Illinois or elsewhere was another decision that she and her family faced. She mentioned how much her family loves UIUC as the reason for ultimately staying.

A significant portion of her work at Illinois has been investigating how to create a synthetic bone substitute. Through this research, she has advised many graduate students. We discussed what kind of environment she tries to create for student researchers in her group. She says that while there are standard benchmarks that need to be hit in academia, graduate research and graduate student mentoring is much more than that. In order to set her students up for success in their careers, she aims to help develop her graduate researchers holistically. Soft skills, like communication and working with others, are a big focus of her work with them, and it is these skills that she would put to use in 2017 when considering the research topic of coral regeneration.

A final decision that we discussed was staying within her primary area of expertise in research or branching out to different fields. By applying some her knowledge of synthetic bone regeneration, her idea was to solve the environmental issue of coral reef decay. After calling more than a dozen NSF program managers, none of them showed interest in this research idea. Finally, by thinking outside the box and going “really big,” she brought together a group of researchers from a variety of disciplines and from all over the world. This group, led by Wagoner Johnson, earned one of the first NSF convergence research awards and last year the team received another grant to continue their work.

Most recently, Wagoner Johnson has become the head of the Department of Biomedical and Translational Sciences in the Carle Illinois College of Medicine. Through this position, she aims to continue to bring brilliant minds together from departments across campus to collaborate on bringing engineering and innovation to medical education and developing engineering solutions to large healthcare challenges.