Living robots made from human cells may induce neuron healing 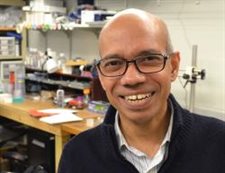 Biological robots made of human tracheal cells can promote the repair of wounded neural tissue in the lab. While the research is still in an early stage, the findings suggest that the robots could one day treat the cellular damage that can occur after a stroke or with paralysis.

In 2020, Michael Levin at Tufts University in Massachusetts and his colleagues created living robots out of frog cells, called xenobots. A year later, they were surprised to find the xenobots can self-replicate.

In their latest work, the researchers grew single tracheal cells, donated from people, over three weeks to form mobile clusters of cells called anthrobots, which ranged from 30 to 500 micrometres wide. Using human cells rather than frog ones reduces the risk of the robots being rejected by the immune system.

The anthrobots are covered in tiny hair-like structures called cilia, which act like flexible oars to propel them at up to 50 micrometres per second. Once formed, the bots can survive in laboratory conditions for four to six weeks before degrading.

When adding multiple anthrobots to a small dish, the team discovered that the robots aggregate into larger “superbots”, each made of a few anthrobots.

To see if superbots influence healing, the researchers grew a sheet of human neural cells in a dish before scratching off some of the cells to generate a “wound” that was roughly half a millimetre wide.

They then placed the superbots at sites along the wound so that each superbot formed a bridge between neurons on either side of the scratch.

Within three days, neural tissue had grown across the wound beneath the bridges. Tissue growth didn’t occur at other sites along the scratch, suggesting that the superbots induced the healing.

“The most amazing [ability of anthrobots] to date is their ability to induce the healing of neural scars,” said the researchers in their paper. “The density of [neural tissue in] theinduced stitch area that was built with the aid of our bots represented full… recovery of the original tissue.”

That a single human tracheal cell can proliferate and form a colony to become a self-propelling, functional machine is unexpected, says Taher Saif at the University of Illinois Urbana-Champaign. “The capability of this machine, as suggested and demonstrated by the authors, is fascinating.”

“It isn’t clear from this study whether the bridge provided by the anthrobots offers advantages over bridges that could be built from other biological [or] engineered scaffold materials,” says Ann Rajnicek at the University of Aberdeen in the UK.

“In particular, the mechanism by which the anthrobots induce neural growth across the gap isn’t clear,” she says. “Is it purely physical or is there a particular microenvironment provided by the anthrobots that is unanticipated?”

Read this story on New Scientist.com >>