An interview with Martin Ostoja-Starzewski

Martin Ostoja-Starzewski, a professor of Mechanical Science and Engineering, also holds appointments at the Beckman Institute, the Institute for Condensed Matter Theory, and the National Center for Supercomputing Applications. After reading a little about his education and career, I knew I wanted to ask him some questions on his unique background as well as the work that led him to UIUC. 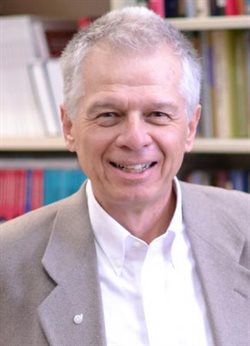 Ostoja-Starzewski first found interest in mechanical engineering design as a teenager. Recalling his high school years, he spoke about an experimental program in math and physics where he received five hours of math and three hours of physics instruction per week. He described this as “essentially undergraduate science education in high school.” He cited this class as especially useful during his later education and research training.

Ostoja-Starzewski studied mechanical engineering at the Cracow University of Technology in Poland in the 1970s. During that time, Poland was under the Russian-imposed communist system. For this reason, he looked west in 1977. First, he was an IAESTE trainee in the steel industry in Japan. After a few months, he flew to Austria and worked as a mechanical engineer designer in Vienna. In the spring of 1978, he boarded a 747 jumbo jet in Brussels and immigrated to Canada.

In our interview, he recounted his interactions during this flight. He said he spent a lot of time walking around and talking with other European refugees who had escaped from communism. He recalled several men who had ran through the Iron Curtain at night while being chased by border guards with machine guns. On the contrary, he also met a family that simply stepped across a sidewalk that separated Slovenia from Italy, stating the Iron Curtain was not uniformly enforced. Once arriving in Canada, he worked his first industry job in Montreal. He then earned a master’s degree and PhD in mechanical engineering at McGill University. Also at McGill, he held post-doctoral research positions in both the ME and ECE departments. After these experiences, he began consulting research on the mechanics of Arctic ice fields for the Atmospheric Environment Service Canada, for which he reviewed satellite images of flow fields of ice in the Beaufort Sea and related them to fractals – a revolutionary concept in the 1980s.

Ostoja-Starzewski is ranked third in career-long impact in MechSE according to the Stanford standardized citation indicators (based on the Scopus database, which does not consistently cover the years before 1970), and in 2020, he was ranked second in the department. Highlights of his work include writings on thermoelasticity, continuum physics, and mechanics of random and fractal media. His first book, Microstructural Randomness and Scaling in Mechanics of Materials (2007, CRC Press), led to the 2018 Worcester Reed Warner Medal from ASME. His second book, Thermoelasticity with Finite Wave Speeds, written in 2010, appeared in the prestigious Oxford Mathematical Monographs series published by Oxford University Press. His third book, Tensor-Valued Random Fields for Continuum Physics, written in 2019, was published in the Cambridge Monographs on Mathematical Physics by the Cambridge University Press. This series began in 1975 with Stephen Hawking’s classic work, The Large Scale Structure of Space-Time.  Ostoja-Starzewski’s fourth book was Random Fields of Piezoelectricity and Piezomagnetism, co-authored with his recent PhD student, Amirhossein Amiri-Hezaveh.

Lastly, Ostoja-Starzewski spoke about his research on scaling in random media and the work he did with his first UIUC student, Shivakumar Ranganathan.  The findings in their 2008 Physical Review Letters paper, “Universal elastic anisotropy index,” effectively replaced the classical Zener index to become a standard of characterization of new compounds in condensed matter physics, bio- and geo-mechanics, materials, and many other fields.

After learning about all of the incredible places Ostoja-Starzewski has experienced, I asked him which location was his favorite to live and work in. He said that Montreal felt like two worlds in one with the French and English cultures thriving side by side, providing many activities and entertainment as a graduate student there. One of his favorites was participating on the McGill ski team. Ultimately, he said, “For a family life and kids, however, you want a much quieter place with a good cost of living. For that, you can’t beat Urbana-Champaign.”