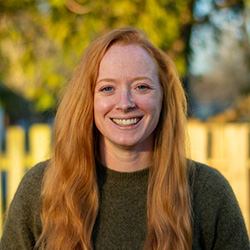 The competition is part of the annual Summer Biomechanics, Bioengineering, and Biotransport Conference (SB3C).

“Our goal is to use exercise at an early age to strengthen horse bones and prevent fractures when they become racehorses,” said Moshage. “However, there are many things we still don’t know about the most effective exercise intervention to induce this beneficial adaptation, such as time of intervention (i.e. number of weeks), age of the horse, distance, speed, and loading direction. It would be expensive and time consuming to test out different exercise interventions in live horses, but we can evaluate interventions pre-clinically using finite element models.”

To build subject specific finite element models from clinical CT scans the researchers use a density-modulus relationship – empirical models developed from mechanical test data and are known to vary by anatomical location and loading direction. Current literature outlines a single density-modulus relationship for horse bone, but it was developed using adult tissue. Young equine bone has differences in its structure, composition, and mineral density.

Their findings have important implications for assessing different exercise interventions in silico.