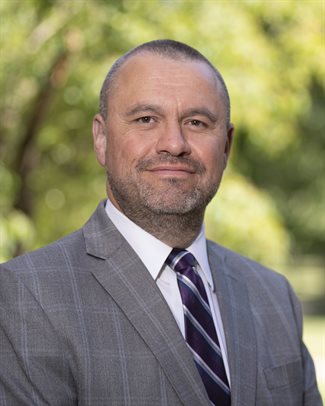 Kenneth T. Christensen (PhDTAM ’01) was a 2022 recipient of MechSE’s Distinguished Alumni honor. He is the Carol and Ed Kaplan Dean of the Armour College of Engineering at the Illinois Institute of Technology, with a joint appointment in Mechanical, Materials & Aerospace Engineering and Civil, Architectural & Environmental Engineering.

Professor Christensen’s research expertise is in experimental fluid mechanics, with an emphasis on flows central to a range of energy, environmental and geophysical applications. His current research focuses on turbulence interactions with complex topography encountered in a range of engineering systems, flow interactions and coupling with complex bedforms that form and evolve in both aeolean and subaqueous natural environments, and multi-phase flow within heterogeneous porous structures, with application to carbon dioxide sequestration in the geosphere. Central to all of these research efforts is the development and utilization of advanced measurement methods to reveal the underlying physics of these flows for improved modeling and prediction, with the latter accomplished through close collaboration with modelers and computationalists.

Professor Christensen has published over 200 archival journal articles, book chapters, and peer-reviewed conference proceedings, is a Fellow of ASME (2012), APS (2013), and AAAS (2017), and is an Associate Fellow of AIAA (2010). He served as Editor-in-Chief of Measurement Science and Technology (MST; 2017-2021), and is a member of the Editorial Boards of Exp. Fluids, IOP SciNotes and MST. His work has been recognized with several awards and honors, including the AFOSR Young Investigator Award (2006), the NSF CAREER Award (2007), the François Frenkiel Award for Fluid Mechanics from APS-DFD (2011), the Dean’s Award for Excellence in Research from the College of Engineering at Illinois (2012), and the Gustus L. Larson Memorial Award from Pi Tau Sigma and ASME (2016).
He is active in APS and AIAA governance, conference organization and has been the Lead Organizer of the Midwest Mechanics Seminar Series since 2012.

Professor Christensen has held several administrative appointments in academia. In addition to his current service as Dean of Engineering at Illinois Tech, he was Department Chair of Aerospace & Mechanical Engineering (2017-2020), Assistant Dean for Faculty Development (2015-2017) and a Provost Fellow (2017-2019) at Notre Dame. At Illinois, he served as Associate Head for Undergraduate and Mechanics Programs in the Department of Mechanical Science and Engineering (2012-2014) and as Associate Director of the International Institute for Carbon-Neutral Energy Research (I2CNER) Satellite Center (2011-2014), for which he also served as a WPI Principal Investigator until 2020. He has also participated in year-long leadership development programs at both Illinois and Notre Dame, and was an invited participant in the 2nd Atlantic Coast Conference (ACC) Academic Leaders Network during academic year 2019-20.