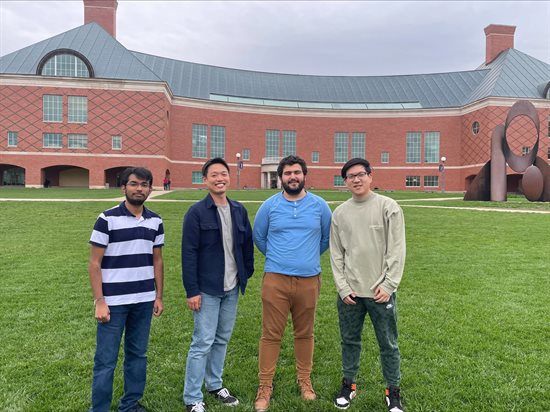 A group of graduate students led by mechanical engineering doctoral student Minjun Sung recently won funding for their proposal under the NASA-sponsored University Student Research Challenge (USRC). The team will continue to the next step of developing a crowdfunding campaign.

The USRC program funds research ideas that could help solve some of the biggest technical challenges facing 21st century aviation. The project must describe a novel approach to addressing one of six major research thrusts as outlined by NASA’s Aeronautics Research Mission Directorate. Selected student teams will be eligible to receive a grant from NASA that is worth up to $80,000 depending on the scope of the proposed project and the ability of the team to raise a small portion of that total by conducting a successful crowdfunding effort.

Their project, “Congestion Aware Path Planning for Optimal [Unmanned Aircraft System] UAS Traffic Management,” focuses on urban congestion and traffic management, but not for road vehicles. Instead, its focus is on unmanned aerial vehicles (UAVs) like drones. The last few years have seen a significant increase in drone usage for applications including package delivery, weather monitoring, and surveillance. To avoid collisions as well as congestion with this increase in aerial traffic, Sung and his colleagues are beginning research (made possible with the funds from NASA) that combines the engineering problems of drone system controls and the legislature surrounding drone usage.

“Our goal is to bridge the gap between the engineering problem and the legislature,” said Sung. He said much of the legislation surrounding UAS’s is vague so the team is working on translating those in a way that the drones can understand.

Their research involves two main areas: aerial map creation and path planning. Using regulations as a guideline, they hope to create zones defining areas that are safe to fly in, highly congested, and that shouldn’t have any drones or collisions. For example, flying above buildings with rooftops is relatively safe because if a collision occurs, minimal damage will be done, whereas flight above sidewalks should be avoided as much as possible as a collision could very likely injure pedestrians. These maps create “offline” planning which is static and set before the drone takes flight. Combining this with online planning – where the drone will read data from its immediate surroundings – the drones should be able to alter their path to safe alternative routes.

“Air mobility is a concept which is fantasized about but also feared at the same time,” said Christoph Aoun, one of the project team members.

Sung, Aoun, and their fellow graduate student researchers, Christophe Johannes Hiltebrandt-McIntosh, Ran Tao, and Sambhu Harimanas Karumanchi, all work with Professor Naira Hovakimyan in her Advanced Controls Research Laboratory studying controls, including safety control and trajectory optimization. Team member Ivy Fei is an undergraduate student in the Gies College of Business—as the proposal requires a multidisciplinary effort to conduct the engineering research while also developing the business side, including crowdfunding.

“The drone market is growing,” Sung said. “There will be more use cases and congested areas in the near future, especially in urban areas, as people utilize more drones in their lives.”