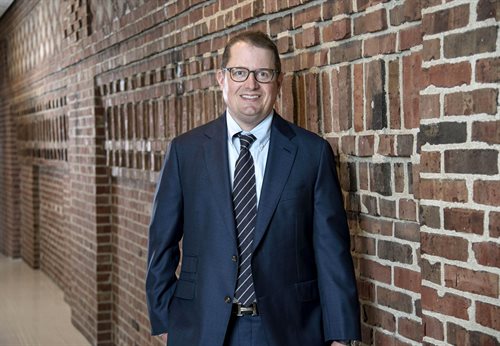 MechSE Professor Bill King has been named an inaugural recipient of the 2022 College Award for Excellence in Translational Research.

The award, introduced this year, honors faculty or staff researchers for special achievements in, for example, entrepreneurial activities related to research outcomes, technology transfer of research through licensing of intellectual property, and research leading directly to products or outcomes with significant societal impact.

King’s accomplishments in this arena include three startup companies based on the research conducted in his lab, nearly two dozen patented discoveries and developments that have been commercialized by industry, and his extensive leadership in bringing the Illinois RapidVent to market. The real-world applications from his research lab have touched the lives of millions of people around the world.

His most recent company, Fast Radius, which mostly focuses on additive manufacturing, CNC machining, and injection molding, allows for fast and highly automated delivery of these services. Fast Radius now has 325 employees and has produced more than 12 million parts – its polymer additive factories among the largest in the world. Earlier this year, the company went public with an enterprise value of more than $1 billion.

A second company, Anasys Instruments, features a metrology technology that has had significant impact on the manufacturing research community and is widely used by industry for developing new manufacturing processes and materials. His pioneering work in AFM-based nano-manufacturing was translated from his lab to the development of the company.

RapidVent, a project that developed an emergency ventilator in response to the emerging pandemic in 2020, is now licensed by more than 70 organizations in 15 countries—the greatest number of licenses from the university ever granted for a single technology – by far.

King, who is also the Ralph A. Andersen Endowed Chair and a faculty at the Carle Illinois College of Medicine, will be formally recognized at the college’s Faculty Awards Ceremony on April 25 at the Campus Instructional Facility.