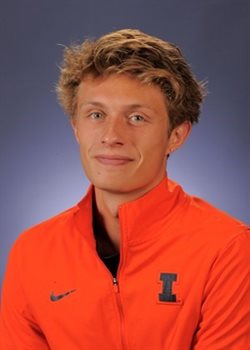 Applying to college is an incredibly stressful time. With the added pressure of hoping to continue playing sports during college, selecting a college can feel very scary. Edwin Siuda, a current junior, chose to study mechanical engineering at UIUC in large part because of its track and field team.

From the beginning, Siuda said he liked “being around all the guys on the team and felt very appreciated and welcomed by the coaches.” Of course, Illinois’ top-ranked engineering program was enticing, and so, in combination with the amazing track and field team, Siuda’s college decision was made.

Outside of track and field, Siuda is a big fan of his thermodynamics professor, MechSE Professor Leon Liebenberg. Liebenberg teaches many mechanical engineering courses, which include projects for students to dive deeper into course material.

Being involved in research, athletics, and a mechanical engineering major is a heavy workload. On top of that, track and field takes up most of Siuda’s time. The team sometimes has two practices a day, lasting one to three hours, all while devoting off-time to sleep and eat and stay healthy. The amount of time this takes can add up. However, because Siuda loves it so much, he said “all the time and effort I put into the sport more than pays off.”

When he is not doing schoolwork, Siuda spends most of his time with the track and field team. He loves being a part of a team and spending most of his day-to-day life with all his best friends. This team has opened new opportunities and experiences that Siuda would not have had otherwise. After all, Siuda’s “favorite part of coming to Illinois has been the people he has met.”

After he earns his undergraduate degree, Siuda said he would like to complete a fifth-year graduate program and stay for a fifth year on the track and field team.