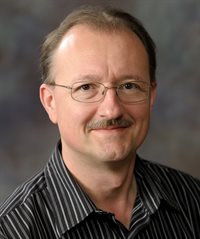 Ralf Moller, Director of Technical Services for MechSE, has been quietly fighting the Covid-19 pandemic since its onset. First becoming involved in March of 2020 with his work on the Illinois RapidVent emergency ventilator, Moller has designed and produced a plethora of Covid-related protective equipment, such as face shields and mask components.

More recently, Moller was approached by Illinois’ mobile SHIELD team with a request to build a machine that would fit in a mobile lab—where space is a valuable commodity. At UIUC, the mobile lab is located in a trailer designed by ISE assistant professor Abigail Wooldridge.

“They had very little space in the lab—it was a trailer with limited bench space,” Moller said. “I said I could come up with something because I like programming and I have a machining/electronics background and experience in 3D printing.”

covidSHIELD was first developed at Illinois as a means for enabling in-person classes during the 2020-21 academic year. The program, which only requires a small saliva sample for testing, bypasses the RNA extraction step typically used in Covid-19 tests—for faster results at lower cost. Since its advent, the SHIELD program has expanded across the state, with more than 1,200 public grade schools signing up to implement its testing for their 2021-22 academic year.

The mobile lab had recently acquired several hundred thousand test tubes from Germany for collecting saliva samples and first tasked Moller with designing trays that could hold 48 of the smaller-sized tubes in rows of four. After he produced a plastic prototype in MEL in the Rapid Prototyping (RP) Lab for testing, MechSE’s machine shop made an aluminum version for better durability and heat resistance. The final design was sent to a third-party machine shop for production, as the team needed several dozen trays for gathering the daily round of samples. Moller then needed to create a machine that could unscrew the caps from tubes on the trays during the sample testing process.

“A lab technician had to sit and unscrew the caps for thousands of tubes per day,” Moller said. Although at that time there was a commercial machine on the market designed for such a purpose, it had limited availability (ironically, due to pandemic-related delays) and cost roughly $60,000.

Instead, Moller designed and fabricated custom parts and repurposed a small CNC mill for unscrewing the caps. Modifications to the original mill included replacing the aluminum bed with a custom designed, lightweight, 3D-printed tray and building a double twin tool head with four bits so that a row of tubes on the tray could be unscrewed simultaneously. He also added custom structural components and cooling elements to support faster movement.

“The machine I had to design had to keep up with the same cycle time as the next step, the pipetting machine,” said Moller, explaining that after the caps were unscrewed, the saliva samples would be passed to another machine for processing.

His final iteration of the machine can unscrew two trays of 48 tubes apiece in about four minutes, which matches the cycle time, including loading and unloading, for the pipetting machine. Caps get deposited into a bin at the back of the machine for proper disposal. Moller programmed his machine in G-code prior to delivery, so a lab technician needs only to load the two trays side by side into the machine bed and press one button to commence the cycle. After the cycle is completed, the lab technician can remove the trays, empty the cap bin, and load new trays.

Moller’s completed machine was delivered to the University of Wisconsin-Madison for use in their mobile unit. Moller has also designed and fabricated larger tube racks for use in the local SHIELD lab located in UIUC’s Veterinary Diagnostic Laboratory.

Moller's machine can unscrew 96 caps in about four minutes.