An interview with Professor Alexander Vakakis 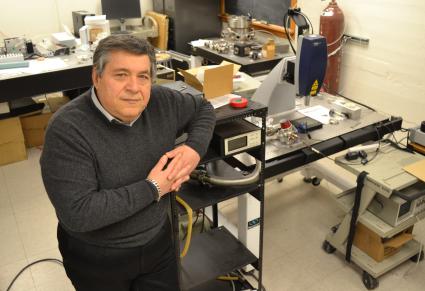 When he was a high school student, Professor Vakakis always had the desire to use and design machines. He was especially fascinated by the NASA missions at the time but felt that mechanical engineering was a much more versatile field than aerospace engineering, allowing him to choose a specialized area later in his education and career. Professor Vakakis spent his undergraduate years at the University of Patras in Patras, Greece, graduating in 1984 with a Diploma Degree in Mechanical Engineering. He continued his education at the University of London’s Imperial College of Science and Technology, where he completed his MSc in Advanced Applied Mechanics in 1985.

After completing his MSc, Professor Vakakis served his military conscription in the Hellenic Army. During his time enlisted, he worked at the Research Center for National Defense in Athens, Greece. He described his work as consisting of “measuring signals from the ground and determining the kind of machines that were approaching.” After his military service, he continued his education at the California Institute of Technology, where he earned a PhD in Applied Mechanics in 1990. He has been a professor in MechSE since his graduation from Caltech, except for a period from 2000–2008 when he took a position as professor at the National Technical University of Athens.

The first research project that Professor Vakakis led dealt with the topic of nonlinear normal motor localization, or the study of passive motion confinement in vibrating systems. His first funded project, which was compensated by the Dow Chemical Company, dealt with designing layered media as shock protectors. Since then, his research primarily consists of work with acoustics and vibrations. Currently he and his research group designs acoustic metamaterials—engineered materials with advanced properties that do not occur in nature—to be used as shock isolators so that vibrations and shock can be reduced in a variety of applications. His team is also developing new ways to harvest energy, especially energy from vibrations.

Professor Vakakis believes that the applications for his research are endless. The shock absorption elements of his work could be applied to helmets for football players and motorcyclists. They are also developing new ways for the properties of the materials they are creating to be transferred into construction materials in earthquake-prone areas of the world. As for his energy-harvesting research, he believes that it could be widely applied to coastlines across the world where the energy from the waves crashing on the beaches can be converted into useable energy.

The final career-related question I asked Professor Vakakis was, “What have you found the most rewarding about your work?” He answered by saying, “Beyond question—teaching.” He greatly enjoys meeting students years after graduation knowing that he had some positive impact on their lives and careers. He said he is proud of every project that he’s done with graduate students and undergraduate students, and that the most important part of working with students is that they’re exceeding their own expectations, not his.

Professor Vakakis’ message to undergraduate students considering becoming a research assistant is that it is a great experience to have no matter whether you are planning on doing graduate work or joining the work force. Academia has much to offer undergraduates regardless of career path and regardless of their engineering discipline.