Engineers have added a new capability to electronic microchips: flight.

About the size of a grain of sand, the new flying microchip (or "microflier") does not have a motor or engine. Instead, it catches flight on the wind -- much like a maple tree's propeller seed -- and spins like a helicopter through the air toward the ground.

By studying maple trees and other types of wind-dispersed seeds, the engineers optimized the microflier's aerodynamics to ensure that it -- when dropped at a high elevation -- falls at a slow velocity in a controlled manner. This behavior stabilizes its flight, ensures dispersal over a broad area and increases the amount of time it interacts with the air, making it ideal for monitoring air pollution and airborne disease. 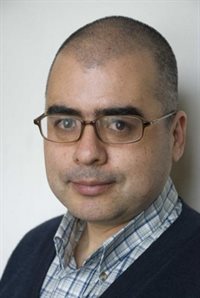 As the smallest-ever human-made flying structures, these microfliers also can be packed with ultra-miniaturized technology, including sensors, power sources, antennas for wireless communication and embedded memory to store data.

MechSE’s Leonardo Chamorro is a corresponding author and his former doctoral student Jin-Tae (Jimmy) Kim (now a postdoc in Professor John Rogers’ lab at Northwestern University) is a co-first author of the paper. A pioneer in bioelectronics, Rogers was previously on the faculty of the Department of Materials Science and Engineering at Illinois.

The work resulted from a synergistic collaboration with an international team led by Rogers. The team showed that wind-dispersed seeds open possibilities for aerial schemes to distribute components via a controlled, unpowered flight in natural environments and cities. These battery-free, wireless, miniaturized passive fliers for atmospheric measurements provide simple examples of a broad spectrum of applications, including environmental monitoring, population surveillance, and disease management.

Chamorro and Kim aided in the analytical and state-of-the-art experimental studies of the aerodynamics of high-performance structures that allowed for establishing fundamental considerations in bio-inspired, 3D fliers that exhibit controlled rotational kinematics and low terminal velocities.

“Quantifying the flow dynamics induced by microfliers and characterizing the distinct aerodynamics of such structures enabled a better understanding of the mechanisms modulating passive motions and provided insight for design optimization,” Chamorro and Kim said.

The study, "Three-dimensional electronic microfliers inspired by wind-dispersed seeds," was supported by the Querrey Simpson Institute for Bioelectronics at Northwestern University. In addition to Rogers and Huang, co-corresponding authors include Leonardo Chamorro of the University of Illinois and Yihui Zhang of Tsinghua University in China. The paper's first authors are Bong Hoon Kim of Soongsil University in Korea, Kan Li of Huazhong University of Science and Technology in China, and Jin-Tae Kim and Yoonseok Park, both in Rogers' lab at Northwestern.

The research is also featured on the cover of the September 23 issue of Nature.

This article from Northwestern provides more details about the research.