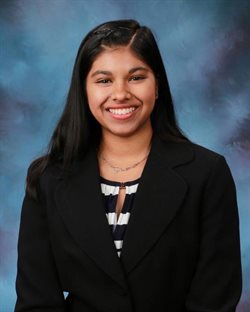 MechSE senior Isha Tyle recently won her fourth scholarship from the American Society of Mechanical Engineers (ASME). She is earning her degree in mechanical engineering with a minor from the Hoeft Technology and Management Program.

The ASME Foundation, the fundraising arm of ASME, awarded 152 scholarships valued at more than $500,000 to engineering students in a virtual event on August 25. The 2021-2022 cohort of 113 students is the largest-ever group of ASME Foundation, Auxiliary, and Divisional scholarship recipients representing the highest-ever aggregate funding amount. As part of ASME’s commitment to expanding diversity, equity, and inclusion in the engineering community, more than half of scholarship recipients are women and members of underrepresented groups. Awards are given to high-achieving student members of the Society who are enrolled in two-year, four-year, and graduate degree programs.

“Engineers are problem solvers, but some problems – including the very high cost of getting an engineering degree – don’t have an engineering solution,” says ASME Executive Director/CEO Tom Costabile. “The solution to that problem is the generosity of those who donate to our ASME Foundation and Auxiliary scholarship funds. Thank you for your support of today’s student engineers who will bring world-changing innovations to life.”

Tyle has been actively involved with numerous organizations across campus, encouraging student activism and outreach activities for future generations of women engineers. She has held leadership positions with SWE, ASME, WiM, EOH, GLOBE, T&M, and has successfully completed four internships across various industries throughout her 4.5 years in MechSE.

“This year was the biggest scholarship amount I have received and I am very proud of the hard work I have done to reach this point,” Tyle said.