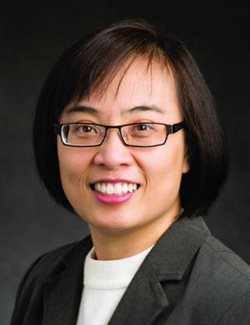 Professor Elizabeth Hsiao-Wecksler took the helm last week as the 2021-2022 President of the American Society of Biomechanics (ASB) at the annual meeting.

Her three-year term, for which she was nominated and elected, began last year in her role as President-Elect. In 2022-2023 she will serve as Past-President for the society.

Hsiao-Wecksler, a Willett Faculty Scholar, has a long history of active involvement in ASB, beginning as a student member. She has been involved in multiple ASB committees and activities, including abstract reviewer and session co-chair almost annually since 2003. In 2010, she was elected to serve on the ASB Executive Board for two years as Program Chair-Elect (2010-2011) and Program Chair (2011-2012). In 2018, Hsiao-Wecksler was named a Fellow of ASB.

“As ASB President, I will continue to give back to the society. As an advocate for diversity, inclusion, and mentoring, I am especially interested in promoting additional Strategic Plan activities, practices, and policies that increase and support the currently low racial, ethnic, and ability-status diversity of meeting attendees/presenters, ASB members, and test participants in biomechanics research studies to better represent the diversity of the American population,” Hsiao-Wecksler said when she began her term last year.