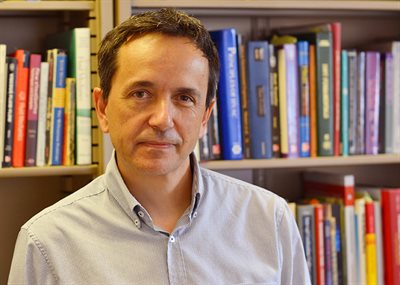 Teaching Associate Professor Leon Liebenberg is a proponent of project-based learning—a student-centered pedagogy that suggests students learn better when they have the autonomy to actively explore real-world challenges and problems. So, in two of his Spring 2021 lecture courses, ME 200 (Thermodynamics) and ME 400 (Energy Conversion Systems), a key component of both is mini-projects and E-portfolios. Why? He says they engage students emotionally. He goes on to explain the advantages of doing so.

In a paper recently accepted for presentation at the ASEE Conference in July 2021, Liebenberg claims that in online instruction (which all institutions were forced to embrace over the past year due to COVID-19), even more than in face-to-face instruction, “engineering educators need to involve students at cognitive and emotional levels that encourage authentic, meaningful, and immersive learning experiences.” He adds that in traditional online learning, students often “feel disconnected from their learning communities,” and also report “a lack of motivation.” The remedy? “Emotional Engagement.” He claims it’s “a necessary complement to cognitive engagement and can further help to facilitate intrinsic motivation and feelings of delight, surprise, understanding, empathy, and trust.”

Thus, Liebenberg’s course design for both ME 200 and ME 400 this past semester incorporated self-directed mini-projects. For instance, ME 400 had five: the first four were team-based; for the fifth, each student completed individually. According to the course syllabus, mini-projects were designed to help students comprehend various aspects pertaining to energy conversion systems, so as to better understand the viewpoints of various stakeholders and to understand how to create optimal energy solutions based on best practices.” Plus, each mini project was required to help achieve the United Nations Sustainable Development Goals (SDGs).

The idea was to inculcate the principles being taught by having the students apply them via hands-on, real-world projects they could direct themselves and identify with personally. Not only that, but each mini-project built on the knowledge/skills students had attained in the previous ones. Plus, as an added incentive for students when completing Mini-Project 5, the top ME 200 winner (as decided by Liebenberg and his TAs) got 3% added to their final grade; the top five ME 400 winners got 2% added to their final grades, while the overall winner received a bump of 5%! Not only that, but winning students would also be linked with industry or thought leaders, thus enhancing their network of contacts.

“These series of mini-projects work incredibly well—the students work hard but they love this kind of assignment that gives them autonomy; and the opportunity to showcase their work on social media, among others,” he explains.

Following are some of the winners based on their final mini-projects. They share a bit about their projects, including how/why they chose them; challenges they encountered and overcame; and skills/knowledge they gained form the class or the projects themselves that they believe they’ll use down the road.

For instance, one of the top five projects in Liebenberg’s ME 400 class was created by Bryce Coffey, a MechSE grad student. Coffey is researching how vapor compression refrigeration systems—thermodynamic systems that are essential for air conditioning to function in residential buildings—can be optimized to be more sustainable since they emit substances that are harmful to the ozone layer. Coffey previously did a project on vapor compression systems with Liebenberg’s help. “Also,” he adds, “since I am looking to work within the architectural industry, I had learned that these types of thermodynamic systems are common for engineers to come across in building services projects.”

The most challenging aspect of his project, according to Coffey, was interpreting the research jargon in the various science journal articles he perused while coming up with his own interpretations of the data. He acknowledges that “knowing how to research is a huge takeaway I got from this class.” He hadn’t used Google Scholar prior to this class, and claims, “It has helped me cite and search articles for all sorts of specific technical topics.”

MechSE senior, Ying Guan, who also has a minor in the Hoeft Technology and Management Program, shares about her project. She asserts that “Implementing solar energy, a sustainable and essential resource, in rural areas in developing countries is one way towards achieving gender equality.”

Indicating that she’s always been interested in DEI (diversity, equity, and inclusion) initiatives, she says that's why she also addresses it in the Engineering Council as the DEI Committee Chair and in the T&M (Hoeft Technology and Management) program. Guan claims, “It is very important to me as a woman to always be an advocate for other women, because I understand the struggle, especially in the STEM industry. Learning more about the SDGs (see Guan's analysis of SDGs at the bottom of the article) and how other women’s lives around the world are different from mine, I realized it is essential to fully understand how they are all interconnected.” In this project, it was demonstrated using sustainable energy. “Being able to see how women are making an impact in the world using clean energy was extremely rewarding,” she admits.

Guan says the most challenging part of the project was seeing a connection between gender equality and solar energy. While she didn’t immediately see the connection at first, after thinking about it and doing more research, it made sense. “Gender inequality is definitely a big issue to combat,” she claims, “but I did not know how sustainable energy played into making the world a better place. Understanding gender equality and how solar energy can help achieve that one day brings a lot of hope. It was eye-opening for sure.”

Guan claims that one skill she learned was how to think outside the box. “It sounds very basic, but this is something that I have been trying to do since I first heard about it,” she acknowledges. “With this course, I was able to exceed my own imaginations and connect two topics that do not immediately relate to each other and write a project about it.” Through looking at both the big and the small picture at once, she says she realized that “Many researchers are also understanding the connections and implementing metrics to see its impact.”

Another winner, Jessica Mingee, a MechSE junior, created a project that involved designing a framework for contextualizing solar microgrid designs for implementation in remote, off-grid areas that lack access to electricity. She sought to integrate “technical considerations with the power dynamics, economic systems, political conditions, and cultural identities” of the communities seeking access to electricity.

Mingee says her idea was inspired by the Contextual Engineering Research Group she’s involved with. “Specifically, a graduate student in the group had extensive knowledge of microgrid design and the critical need for contextualizing technological solutions,” she explains. “From there, I adapted concepts from my own research in the group to this topic.”

Explaining that contextual engineering not only requires one to be well-versed in the technical aspects of design, but also requires a mindset for understanding how design should be informed by the other non-technical facets of a project, Mingee reports:

started the project with little knowledge of microgrids, a big challenge was gathering that holistic understanding of the technology. Furthermore, connecting contextual information with design information was a major challenge, especially without real-world experience on the topic. Just knowing that context is important doesn’t quite tell you how to actually incorporate it into design.”

Mingee says the open-ended/self-directed nature of the mini projects allowed her to explore a lot more than she typically would for a class project.

“This class, and specifically this project, has taught me the critical-thinking skills to view concepts while bearing in mind their relevance to global challenges, and their connection to the Sustainable Development Goals,” she acknowledges. “This is something I will certainly carry along with me for the rest of my student and professional career.”

She adds that she also learned how to work with different online platforms to present her ideas. “I think it is an extremely important skill to be able to effectively communicate your ideas to an audience,” she states.

In addition to being one of the top five finalists, Mingee was part of the team with the top team performance based on the series of four mini projects, along with teammates Jill Prigge and Kyle Reed.

Another ME 400 winner was MechSE senior Jonathan Ortiz, who reports: “I believe an innovative way to address a substantial number of Sustainable Development Goals, as outlined by the United Nations, is by utilizing wind energy in conjunction with revamping our public transportation sector with electric alternatives.”

Ortiz indicates that he decided to pursue his project to “hopefully shed light on a form of clean energy that has a growing potential within the United States because, through education, we can foster the public support needed for large-scale change.”

According to Ortiz, one of the challenges he encountered was that with the pace that technology is currently moving, it was difficult to find relevant information from recently published journals from which he could draw meaningful conclusions. He claims that recent breakthroughs have not been analyzed in-depth compared to older technologies.

He shares what he liked the most about this course: “It gave me the opportunity to learn about the interconnectedness between political, social, and environmental implications that my decisions as an engineer can have.”

For her ME 200 final project, rising MechSE junior Mary Pelzer wrote a two-part proposal to reduce US carbon dioxide emissions. Her plan involved changing the cement industry by using carbon-negative cements with innovative chemical compositions, along with using biomass as a fuel replacement for coal.

“The project goal was to reduce US greenhouse gas emissions,” she acknowledges, “so I looked at data showing the amounts of carbon dioxide that various industries emitted.” She focused on the cement industry “because it is lesser known, but contributes considerably to greenhouse gas emissions, so a novel proposition could potentially have significant effects.”

The biggest challenge she encountered, according to Pelzer, was “the amount of research required to fully understand the current cement manufacturing process and available methods of reducing greenhouse gas emissions, including existing novel cement products.”

Regarding skills/knowledge she believes she'll be using down the road, Pelzer claims her project developed her research and problem-solving skills and promoted self-directed learning.