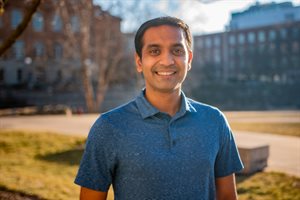 MechSE doctoral candidate Bashar Emon was one of seven graduate students from across campus to be awarded a Beckman Institute Graduate Fellowship for the 2021-22 academic year. The program offers University of Illinois graduate students at the MA, MS, or PhD level the opportunity to pursue interdisciplinary research at the Institute.

Emon is pursuing a PhD in theoretical and applied mechanics and will work with MechSE professor Taher Saif, Rohit Bhargava of bioengineering, and Kannanganattu Prasanth of cell and developmental biology. He hopes to develop a new tool to study biological processes in space and time, in both their physical and chemical components.

He will combine a 3D biophysical sensor developed in Saif’s lab with Raman chemical imaging developed in Bhargava’s group. He hopes his new system will, for the first time, allow live imaging of cytoskeletal activities while measuring cell force and remodeling. He hopes it will show how cell force drives intracellular functions and how connective cells communicate with cancer cells. His work may eventually be used to study cancer progression and can be applied to other organs and systems.